Miley Cyrus is opening wide with late-night bath action, and she’s got something to show off. The 28-year-old superstar singer has hopped aboard the celebrity trend of diamond teeth grills, with footage on the “Midnight Sky” hit-maker’s Instagram last night making a big deal out of her new bling. Posting for her 127 million followers on Thursday, Miley stripped right down for a bedtime bath soak, and it was nudie action and grills from the former Hannah Montana star. Check it out below. 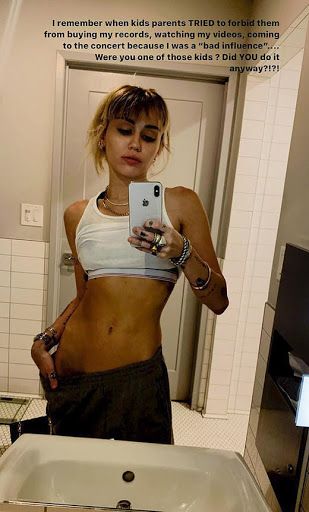 Scroll for the tub action. Miley, who has been making 2021 headlines for her Super Bowl LV performance and her new rocker image, was definitely channeling the latter. The blonde’s videos, coming as selfies, showed her enjoying some late-night self-care, with Miley totally naked in her bath and just about staying inside Instagram’s no-nudity rules.

Shot with red lighting and the bath water bouncing around her, Miley appeared a little blurry, but her point was crystal-clear. It was grinning from the singer, and one fat grill.

See The Grill Below!

Protecting her chest with a carefully-placed hand, Miley pouted for the camera, then opening that mouth wide to reveal both her famous smile and one very expensive-looking grill. Glitter galore on the lower set of teeth, with a second video even seeing the choppy-haired star pull down her lower lip to really show it off.

Miley’s bathtub action has been making headlines this year, already seeing her reveal a knee injury with a Band-Aid during a soak. See the video and more photos below.

Miley is fresh from celebrating 15 years since Hannah Montana first aired on the Disney channel. The daughter to Billy Ray Cyrus penned a long, hand-written note to mark the milestone, writing:

‘Hi Hannah, It’s been a while. 15 years to be exact… Since the first time I slid those blonde bangs over my forehead in the best attempt to conceal my identity and then slipped into a puke pink terry cloth robe with a bedazzled HM over the [heart].”

“I didn’t know then…that is where you would live forever,’ she added. More photos below!

Cyrus added: “Although you are considered to be an “alter ego” in reality there was a time in my life when you held more of my identity in your glovette than I did in my bare hands. You were a rocket that flew me to the moon and never brought me back down.”

The bubblegum image is now long gone, with 2020 ushering in a punk rocker one via Plastic Hearts album, an EP already bringing smash-hit “Prisoner” track with 25-year-old singer Dua Lipa. Miley’s last release was her 2019 SHE IS COMING album.

DMX dead: US rapper Earl Simmons dies at 50 after suffering heart attack and days of coma

DMX dead: US rapper Earl Simmons dies at 50 after suffering heart attack and days of coma