Britney Spears is getting scolded by her own Instagram followers. The 39-year-old princess of pop made headlines ahead of the weekend for updating her account from city streets as she posed by and kissed a cowboy statue she’s fond of, with the “Womanizer” singer’s 29.4 million followers seemingly not digging it. On Thursday, Britney shared three photos during a rare outing, one that now sees users wondering how she got away with being in public and not having the paparazzi catch her. 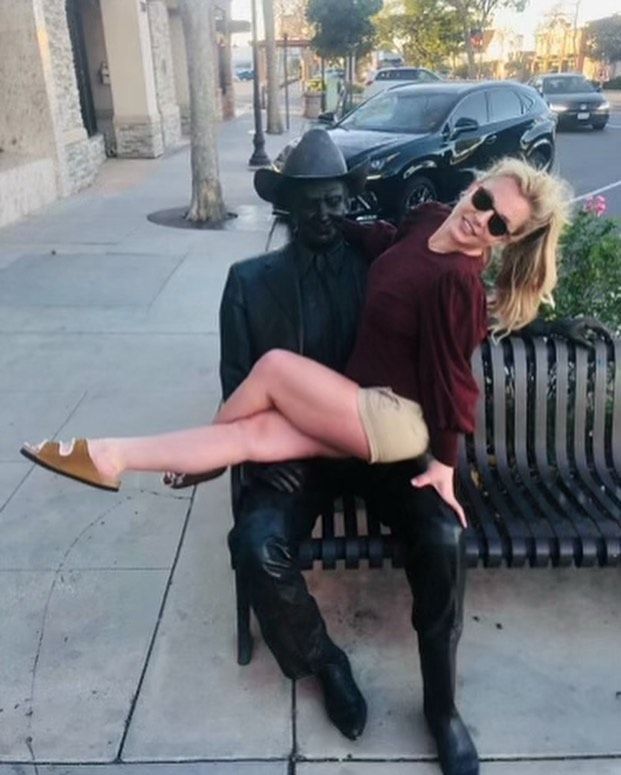 Scroll for the photos and reactions. Britney, largely in the news of late for both her 2008-commenced conservatorship and reaction to documentary Framing Britney Spears, kept her dramas out of this. The Grammy winner’s photos showed her happy, leggy, and looking cute in summery tan shorts, a dark sweater, plus Birkenstock sandals as she went dramatic with a pose across the statue, then planting an adorable kiss on him.

All smiles behind shades and with nobody around, Britney then took to her caption.

They Go Way Back

Going lengthy, the mom of two told fans: “So, me and this cowboy go way back 🤠🤠🤠 … he had a farming job down south and I met him 6 years ago through my cousin. He always told me I was a hard one … but always remember … easy does it !!!”

Closing by calling her followers “wise as-es” as she talked having the “same” camera, the singer kept it light-hearted, but her fans are giving her a hard time.

Told Not To Kiss Public Stuff

Racking up over 3,000 likes is a reply that included a heart emoji, but it nonetheless slammed the singer. “Hey Brit, love you. Please don’t kiss public objects,” the fan wrote.

“Especially not during corona!” another added, with a third writing: “A lot of people are going to be kissing that statue now that Britney has kissed it!” Britney is fresh from celebrating having received her COVID vaccine, even telling fans she “felt nothing.” Scroll for more photos and a video below.

The biggest story around remains Spears finally reacting to the Hulu documentary made about her. At the end of March, the singer updated with an Instagram video of herself dancing to Aerosmith, taking to her caption and writing:

“I didn’t watch the documentary but from what I did see of it I was embarrassed by the light they put me in,” Spears wrote. “I cried for two weeks and well …. I still cry sometimes!!!!”

Britney may return to screens via a possible new Netflix documentary.

Caitlyn Jenner, 71, announces plans to run for Governor Of California 'Worth fighting for'

Caitlyn Jenner, 71, announces plans to run for Governor Of California 'Worth fighting for'